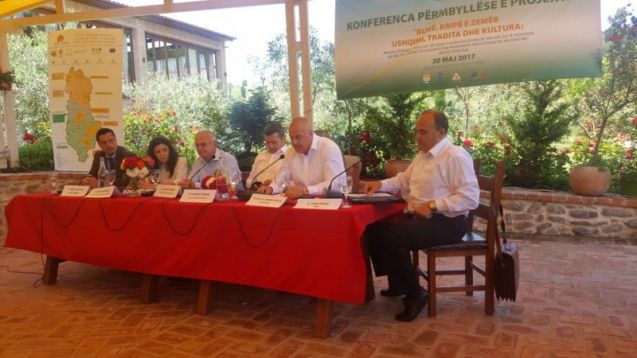 On May 30, 2017, it was held in Tirana the project closing conference entitled “Bread, Salt and Heart – Food, Tradition and Culture: co-development processes in marginalized areas of Northern and Southern Albania” through appreciation of bio-Mediterranean traditional knowledge and products”, co-financed by AICS-MAECI (Italian Agency for Development Cooperation), implemented by NGOs VIS Albania and Cesvi Albania, in partnership with Municipality Malësi e Madhe and Municipality Përmet, in cooperation with Fondi BESA sh.a and PfD Foundation.

Attending the conference were also HE Alberto Cutillo – Italian Ambassador to Albania, Mr. Nino Merola – Head of AICS headquarters in Tirana, Mr. Ardit Çollaku – Director of the Albanian National Tourism Agency, Mr. Paolo Dieci – President at CISP and facilitator in the self-assessment process of the project, Mrs. Valbona Ndoj – Responsible for projects in Albania from the headquarters of VIS Roma, Prof. Ass. Dr. Bajram Mucaj – Executive Director of Fondi BESA, mayors of Përmet, Këlcyrë and Malësi e Madhe, etc.
In the conference there were presented achieved results during the project implementation, best practices and added values in favor of the community development in the districts of Malësi e Madhe and Përmet.

In his greeting speech, Prof. Ass. Dr. Bajram MUÇAJ emphasized that an important component of this project was also the microcredit. The Microcredit in Rural Areas was the commencement model of cooperation between Fondi BESA and VIS-Albania in the first 2009 project entitled “North of Albania: Integrated Rural Development Project in the Communes of Kelmend and Shkrel, District of Malësi e Madhe”, which laid foundations and successful cooperation strategy between Fondi BESA sh.a., VIS Albania and CESVI as well as pursued further with the enclosing project entitled “Bread, Salt and Heart – Food, Tradition and Culture: co-development processes in marginalized areas of Northern and Southern Albania”

Project I: “North of Albania: Integrated Rural Development Project in the Communes of Kelmend and Shkrel, district of Malësi e Madhe”, there have been disbursed 323 loans amounting to 729,000 Euros;

Project II: AID 010170 “Bread, Salt and Heart– Food, Tradition and Culture”: Co-Development Processes in Marginalized Areas of Northern and Southern Albania, until April, 2017 there have been disbursed 589 loans amounting to 1,206,000 Euros.

Therefore, in view of these two projects as a result of the co-financing between Italian Cooperation and Fondi BESA there have been funded a total of 912 loans amounting to roughly 2 million Euros, mainly in the area of Shkodër, Malësi e Madhe, Pukë and Përmet.
Only through a simple comparison there can be highlighted the multiplier impact and effect of this investment. Concretely, the funding by means of both projects in total was 1.15 million Euros, whereas currently according to recent data in May there have been disbursed a total of roughly 2 million Euros. This has been carried out through an efficient use of loan returns and the use of these funds for credit to other clients.

Throughout the implementation stage of these projects, Fondi Besa observes that there is an increasing demand for credit and renewal of clientele, which has affected the direct development of businesses or agricultural activities of these clients and consequently also the economic and social improvement of clients’ families credited to these areas.
The co-funding of available funds for credit has appeared to be very successful. The Fondi BESA has managed to offer credit in those areas in which no other banking or financial institution operates due to the risk they represent. The impact of these projects has been complex, not only on the economic empowerment and development of clients’ activities, but also on the financial education and their social inclusion, enhancement of quality of life of these inhabitants, children’s education etc.

The Fondi Besa is aware of the need for financial products in other areas as well. The unemployment rate is high and a joint effort of financial institutions and not only is needed, in order to direct the attention to this population segment. The microfinance in Albania is already a very important instrument to support the starting of new businesses. The microfinance institutions and their presence in the financial market must be evaluated and supported.

This model of cooperation by means of projects in the field of microcredit in rural areas represents a successful model that must be developed in the future both through microcredit and other opportunities as warranty schemes.

Register and receive all the updates from fondi BESA